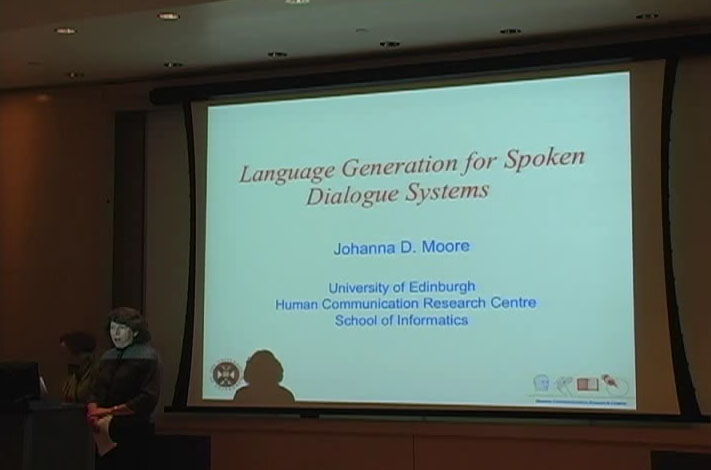 Watch the video
ABSTRACT: The goal of spoken dialogue systems (SDS) is to offer efficient and natural access to applications and services. A common task for SDS is to help users select a suitable option (e.g., flight, hotel, restaurant) from the set of options available. When the number of options is small, they can simply be presented sequentially. However, as the number of options increases, the system must have strategies for summarizing the options to enable the user to browse the option space. In this talk, we evaluate two recent approaches to information presentation in SDS: (1) generate summaries by clustering the options to maximize coverage of the domain (the Refiner approach) and (2) generate summaries by clustering options to maximize utility with respect to a user model, using linguistic devices (e.g., discourse cues, adverbials) to highlight the trade-offs among the presented items (the user-model based summarize and refine (UMSR) approach). We use a Wizard-of-Oz methodology to evaluate the approaches in an interactive setting. We show that in addition to being preferred by users, the UMSR approach is superior to the Refiner approach in terms of both task success and dialogue efficiency, even when the user is performing a demanding secondary task.
BIOGRAPHY: Johanna D. Moore, FRSE, FBCS CITP, is Professor of Artificial Intelligence, Director of the Human Communication Research Centre, and Deputy Head of the School of Informatics at the University of Edinburgh. She received her PhD in Computer Science from the University of California at Los Angeles in 1989. She joined the University of Pittsburgh as an Assistant Professor of Computer Science and Research Scientist in the interdisciplinary Learning Research and Development Center. In 1994, she was awarded an NSF National Young Investigator Award and in 1996 became Director of the University of Pittsburgh’s Intelligent Systems Program. In 1998, she moved to Edinburgh to take up a chair and the directorship of HCRC. She became a Fellow of the Royal Society of Edinburgh in 2002, and the British Computing Society in 2006. She has served as President of the Association for Computational Linguistics and Chair of the Cognitive Science Society.
Attacking Information Overload in Software Development
Gail Murphy
University of British Columbia 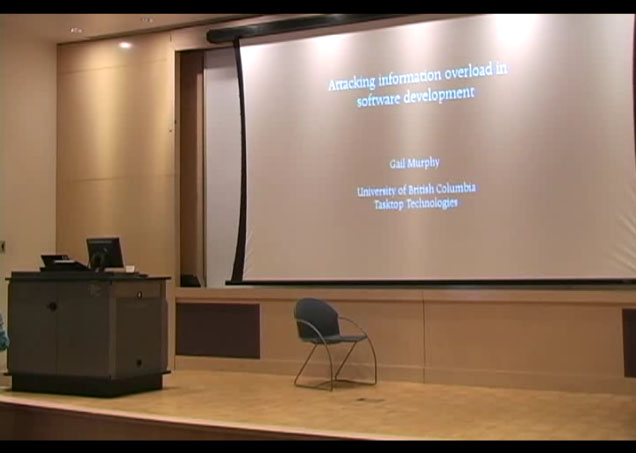 Watch the video
ABSTRACT: The productivity of software developers is continually degrading due to an inundation of information: source code is easier and easier to traverse and to find, email inboxes are stuffed to capacity, RSS feeds provide a continual stream of technology updates, and so on. To enable software developers to work more effectively, software engineering researchers often deliver tools, which produce even more information. The effect of more and more tools producing more and more information is placing developers into overload. To combat this overload, my research group has been building approaches rooted in structure and inspired by memory models. As an example, the Mylyn project packages and makes available the structure that emerges from how a programmer works in an episodic-memory inspired interface. Programmers working with Mylyn see only the information they need for a task and can recall past task information with a simple click. We have shown in a field study that Mylyn makes programmers more productive; the half a million programmers now using Mylyn seem to agree. In this talk, I will describe the overload faced by programmers today and discuss several approaches we have developed to attack the problem, some of which may also pertain beyond the domain of software development if you are also facing overload in your information work.
BIOGRAPHY: Gail Murphy is a Professor in the Department of Computer Science at the University of British Columbia. She joined UBC in 1996 after completing Ph.D. and M.S. degrees at the University of Washington. Before returning to graduate school, she worked as a software engineer at a research and development telecommunications company for five years. She also holds a B.Sc. degree from the University of Alberta. She works primarily on building simpler and more effective tools to help developers manage software evolution tasks. In 2005, she held a UBC Killam Research Fellowship and also received the AITO Dahl-Nygaard Junior Prize for her work in software evolution. In 2006 she received an NSERC Steacie Fellowship and the CRA-W Anita Borg Early Career Award. In 2007, she helped co-found and is currently CEO of Tasktop Technologies Inc. In 2008, she served as the program committee chair for the ACM SIGSOFT FSE conference and received the University of Washington College of Engineering Diamond Early Career Award. One of the most rewarding parts of her career has been collaborating with many very talented graduate and undergraduate students. 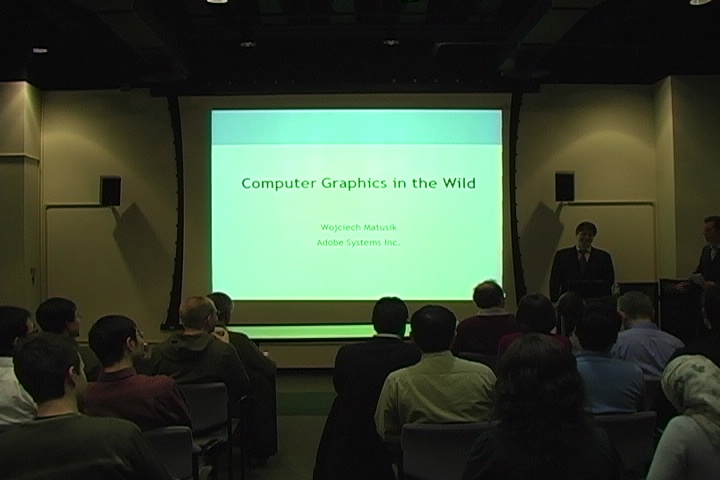 Watch the video
ABSTRACT: Devices and systems for measuring real-world shape, motion, and appearance have contributed to progress in computer graphics over the last 15 years. For example, digital photography and image-based rendering have had a profound impact on rendering. Motion capture has transformed computer animation. Geometry acquisition using 3D scanners has driven developments in geometry processing. However, these techniques typically operate in a laboratory setting and are used by a relatively small number of experts.

In my talk, I will argue that the future of computer graphics lies in novel input/output devices with embedded computation. These devices should operate in real, unconstrained environments, allowing computer graphics techniques to go beyond the lab and to reach a larger population. First, I will describe a wearable system that can continuously capture human motion outside of a studio. Second, I will discuss three-dimensional TV: a complete system that allows for scalable real-time acquisition, transmission, and 3-D display of dynamic scenes. Finally, I will describe mathematical modeling of light reflection from surfaces, based on measurements of physical materials, as well as the reverse process: manufacturing physical materials with desired reflectance properties. Not only do these research projects showcase how computer graphics can be brought into the wild, but they also prompt fundamental research into the representation and processing of data types that go beyond images and video. 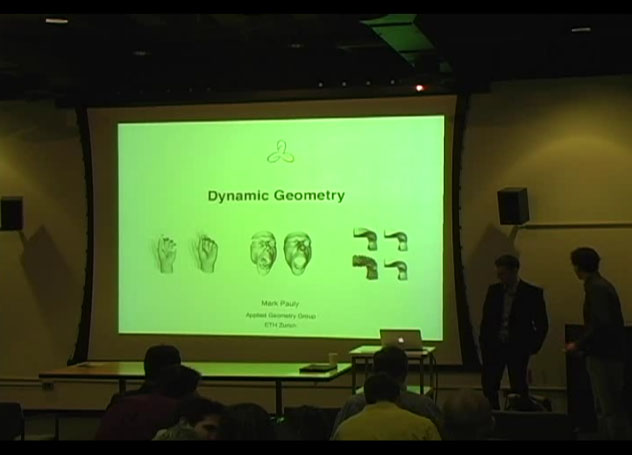 Watch the video
ABSTRACT: Accurate digital representations of dynamic 3D shapes are of great relevance in fields as diverse as medical diagnosis, entertainment, education, robotics, or engineering, and facilitate new discoveries in many scientific disciplines. Advances in 3D acquisition technology are constantly pushing the limits in terms of spatial and temporal resolution, leading to rapid growth of complexity in digital 3D data sets. I will discuss the challenges arising in the analysis and processing of such dynamic 3D content and highlight two techniques that enable scalable geometry processing.

I will first introduce embedded deformation, a reduced deformable model for interactive design of complex 3D geometry and efficient processing of dynamic shapes.

In the second part of the talk I will present a computational framework for high-quality geometry and motion reconstruction based on active stereo acquisition. A novel space-time registration method employs the embedded deformation algorithm to robustly capture complex shape deformations of a wide variety of dynamic materials. Small-scale geometry and motion features, such as folds in cloth or wrinkles in human skin, are reconstructed at high precision with a detail synthesis method that robustly separates geometric features from noise.

BIOGRAPHY: Mark Pauly is an assistant professor at the CS department of ETH Zurich. From August 2003 to March 2005 he was a postdoctoral scholar at Stanford University, where he also held a position as visiting assistant professor during the summer of 2005. He received his Ph.D. degree (with distinction) in 2003 from ETH Zurich and his M.S. degree (with honors) in 1999 from TU Kaiserslautern. His research interests include computer graphics, geometry processing, and computational geometry. He was recipient of a full-time scholarship of the German National Merit Foundation, received the ETH medal for outstanding dissertation, and was awarded the Eurographics Young Researcher Award in 2006.
Random-access rendering of general vector graphics
Diego Nehab
Microsoft Research 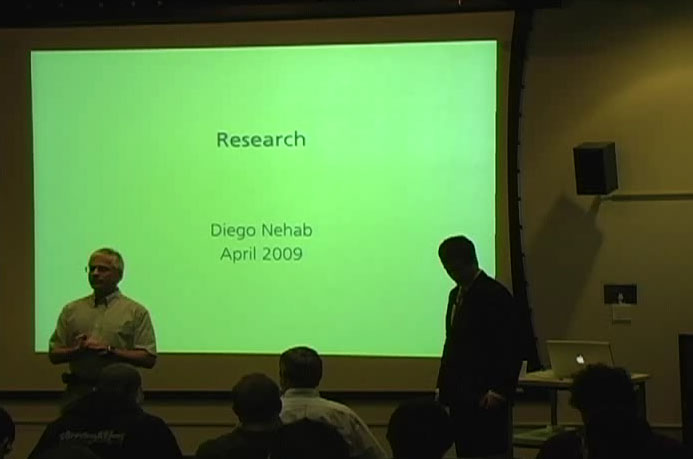 Watch the video
ABSTRACT: I will start by briefly describing some of my work on high-quality 3D shape acquisition from real-world objects. I will explain how position estimates are obtained from triangulation, and how orientations can be computed from photometric measurements. I will then present an efficient method that improves precision by combining these two types of measurement.

In the second part of the talk, I detail my work on drawing high-quality 2D illustrations in real-time. I explain how to preprocess vector graphics for efficient random-access rendering. Using this representation, I show how to leverage the computational power of modern graphics hardware to efficiently render rich, complex illustrations over arbitrary 3D geometry.

BIOGRAPHY: Diego Nehab grew up in Rio de Janeiro, Brazil. He received a B.Eng. in Computer Engineering in 1999 and a M.Sc. in Computer Science in 2002 from PUC-Rio University. He obtained his Ph.D. in 2007 from Princeton University, where he developed new techniques for high-quality 3D shape acquisition. He is currently a post-doctoral researcher at Microsoft Research, where his work focuses on real-time rendering techniques.

Building a Start-up? Learn How to Fundraise From Top Venture Capitalists