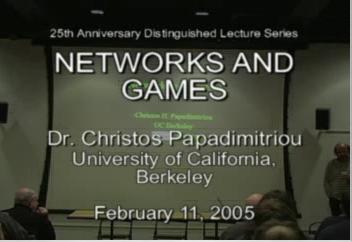 Watch the video
ABSTRACT: The Internet is the first computational artifact that was not designed by a single entity, but emerged from the complex interaction of many. As a result, it must be approached as a mysterious object, akin to the universe, the brain, the market, and the cell, to be understood by observation and falsifiable theories. The theory of games promises to play an important role in this endeavor, since the entities involved in the Internet are interacting selfish agents in various and varying degrees of collaboration and competition. This talk will survey recent work in which networks and protocols are considered as equilibria in appropriate games, and phenomena such as the power law distributions of the degrees of the Internet topology are explained in terms of the complex optimization problems faced by each node.
BIOGRAPHY: Christos H. Papadimitriou is the C. Lester Hogan Professor of Computer Science at UC Berkeley. Before Berkeley he taught at Harvard, MIT, Athens Polytechnic, Stanford, and the University of California, San Diego. He has written four textbooks and many articles on algorithms, complexity, and their applications to optimization, databases, AI, economics, and the Internet. His novel, “Turing (a novel about computation)”, was published by MIT Press this fall. He holds a PhD from Princeton, and honorary doctorates from ETH (Zurich) and the University of Macedonia (Thessaloniki). He is a member of the American Academy of Arts and Sciences and of the National Academy of Engineering, and a fellow of the ACM.
Microsoft Research in India
P. Anandan
Managing Director, MSR India 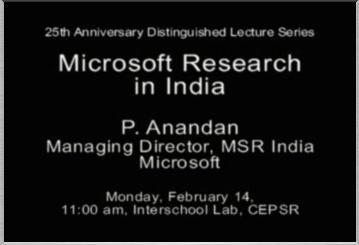 Watch the video
ABSTRACT: Recently, Microsoft Research (MSR) established its 3rd lab outside the US in Bangalore, India. This talk by the managing director of the lab, P. Anandan, discusses the reasons leading up to opening the lab, and a review of the kind of research that will be done in India. The talk also reviews the rapidly evolving state of research in CS and IT in India, and speculates on what the future holds in this respect. The talk includes an introduction to MSR, and its research activities worldwide.
BIOGRAPHY: P. Anandan is the Managing Director of Microsoft Research India. Prior to starting in this role in Jan 2005, he spent 7.5 years as a Senior Researcher at MSR Redmond, where he co-led the computer vision research effort and was manager of the Interactive Visual Media Group. Anandan got his PhD from UMass in 1987 and spent 4 years as an Assistant Professor at Yale and following that 7 years at Sarnoff where he led the Video Information Processing effort. He is among the leaders in the area of visual motion analysis and is known for his work on optical flow and model-based motion estimation.
Applied Nonparametric Bayes and Statistical Machine Learning
Michael I. Jordan
University of California, Berkeley
ABSTRACT: Bayesian approaches to learning problems have many virtues, including their ability to make use of prior knowledge and their ability to link related sources of information, but they also have many vices, notably the strong parametric assumptions that are often invoked in practical Bayesian modeling. Nonparametric Bayesian methods offer a way to make use of the Bayesian calculus without the parametric handcuffs. In this talk I describe several recent explorations in nonparametric Bayesian modeling and inference, including various versions of “Chinese restaurant process priors” that allow flexible structures to be learned and allow sharing of statistical strength among sets of related structures, and Gaussian process priors that allow sharing in the context of multiple nonparametric regressions. I discuss computational issues and applications to problems in bioinformatics. [Joint work with David Blei, Matthias Seeger and Yee Whye Teh].
BIOGRAPHY: Michael Jordan is Professor in the Department of Electrical Engineering and Computer Science and the Department of Statistics at the University of California, Berkeley. He received his Masters from Arizona State University, and earned his PhD from the University of California, San Diego. He was a professor at the Massachusetts Institute of Technology from 1988 to 1998. His research has spanned a number of areas in computer science, statistics, and psychophysics, and he has published over 200 research papers in these fields. In recent years he has focused on algorithms for approximate probabilistic inference in graphical models, on kernel machines, and on applications of machine learning to problems in bioinformatics, information retrieval, and signal processing. He has given invited plenary lectures at the International Conference on the Mathematical Theory of Networks and Systems, the American Association for Artificial Intelligence, the International Joint Conference on Neural Networks, the ACM Conference on Computational Learning Theory, the Conference on Uncertainty in Artificial Intelligence, and the Valencia Conference on Bayesian Statistics.
Intelligent Technology for an Aging Population: The Use of AI to Assist Elders with Cognitive Impairment
Martha E. Pollack
University of Michigan 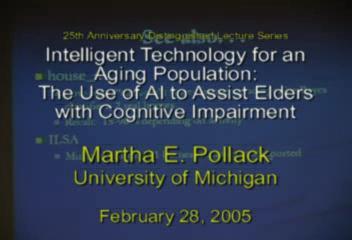 Watch the video
ABSTRACT: Today, approximately 10% of the world’s population is over the age of 60; by 2050 this proportion will have more than doubled. Moreover, the greatest rate of increase is amongst the oldest old, people aged 85 and over. While many older adults remain healthy and productive, overall this segment of the population is subject to physical and cognitive impairment at higher rates than younger people. In this talk, I will survey new technologies that incorporate Artificial Intelligence techniques to support older adults and help them cope with the changes of aging, in particular with cognitive decline. My focus will be on the use of automated planning, reasoning under uncertainty, and machine learning in systems that support extended autonomy, and I will use the Autominder cognitive orthotic system as an example of this type of system.
BIOGRAPHY: Martha E. Pollack is a Professor in the Department of Electrical Engineering and Computer Science at the University of Michigan, where she is also Associate Chair for Computer Science and Engineering. She has also been on the faculty at the University of Pittsburgh, and a research staff member at the AI Center at SRI International. Pollack received her B.A. degree from Dartmouth College and her Ph.D. from the University of Pennsylvania. A Fellow of the American Association for Artificial Intelligence, she recently completed a 4-year term as Editor-in-Chief of the Journal of Artificial Intelligence Research. She has done research and published in the areas of automated planning and execution monitoring, temporal reasoning, and natural-language processing, as well as in assistive technology for cognitively impaired people. She was one of the founding members of the Nursebot project, and in April of 2004 she testified before the United States Senate Special Committee on Aging about the potential value of assistive technology in an aging world.
Internet worms, cascading failures, and epidemics
Don Towsley
University of Massachusetts, Amherst 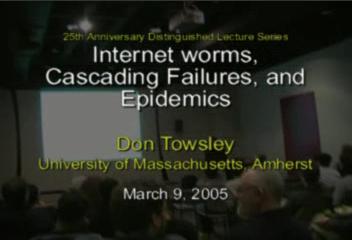 Watch the video
ABSTRACT: Many network phenomena are well modeled as spreads of epidemics throughout the network. Prominent examples include the propagation of worms (e.g., Slammer) and viruses, and, more generally, faults. In this talk, we apply epidemic spreading models to these phenomena paying particular attention to the following two questions.

In the context of a worm, virulence relates to the time required for it to spread. And in the context of the propagation of faults (cascading failures), virulence relates to the time until faults die out. We illustrate how simple fluid and Markov epidemic spreading models can shed light to the above questions for both worms and the propagation of faults.

BIOGRAPHY: Don Towsley received the B.A. degree in physics and the Ph.D. degree in computer science from University of Texas in 1971 and 1975 respectively. From 1976 to 1985 he was a member of the faculty of the Department of Electrical and Computer Engineering at the University of Massachusetts, Amherst. He is currently a Professor of Computer Science and co-director of the Computer Networks Laboratory at the University of Massachusetts. During 1982-1983, he was a Visiting Scientist at the IBM T.J. Watson Research Center, Yorktown Heights, NY, and during the year 1989-1990, he was a Visiting Professor at the Laboratoire MASI, Paris, France. His research interests include high speed networks, multimedia systems, and stochastic scheduling.

He has been an editor of the IEEE Transactions on Communications, IEEE/ACM Transactions on Networking, and Journal of Dynamic Discrete Event Systems. He is currently on the Editorial boards of Networks and Performance Evaluation. He was a Program Co-chair of the joint ACM SIGMETRICS and PERFORMANCE ’92 conference. He is a member of the IEEE where he was elected to the grade of Fellow for contributions in the area of modeling and analysis of network performance, of the ACM and ORSA He is active in the IFIP Working Groups 6.3 on Performance Modeling of Networks and 7.3 on Performance Modeling.