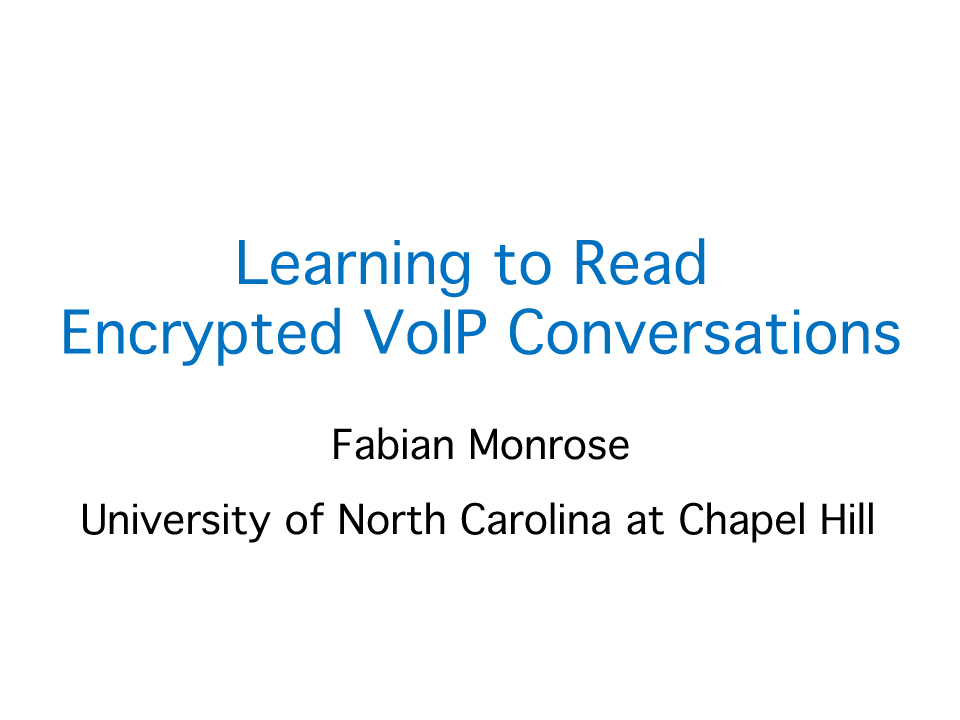 Watch the video
ABSTRACT: Over the past decade, Voice-over-IP (VoIP) telephony has witnessed spectacular growth. Today, VoIP is being used everywhere, and is making steady headway as a replacement for traditional telephony in both the residential and commercial sectors. Yet, even with this widespread adoption, the security and privacy implications of VoIP are still not well understood. In this talk, we will explore why current practices for encrypting VoIP packets are insufficient for ensuring privacy. In particular, we will examine how two common design decisions made in VoIP protocols—namely, the use of variable-bit-rate codecs for speech encoding and length-preserving stream ciphers for encryption—interact to leak information about a given conversation. More specifically, I will recap our recent attempts to reconstruct a hypothesized transcript of a conversation from a bottom up approach that has striking parallels to how infants find words in a speech stream. Time permitting, I’ll discuss some open problems and briefly discuss interesting events that unfolded since the publication of our work.
BIOGRAPHY: Dr. Fabian Monrose is a Professor of Computer Science at the University of North Carolina at Chapel Hill. He was awarded a Ph.D. in Computer Science from the Courant Institute of Mathematical Sciences, New York University, in 1999. After graduating, he joined the Secure Systems group at Bell Labs, Lucent Technologies, where he remained until 2002. From 2002 through 2008 he held appointments in the department of Computer Science at Johns Hopkins University and the Information Security Institute.

Monrose came to UNC-CH in July 2008. His research interests are in computer and information security, and has published numerous papers on the topic, and served on several technical committees for flagship security conferences. He received an NSF CAREER award in 2006. He currently serves as the general chair of the RAID 2013 conference, and recently served as the Program Chair for the 18th USENIX Security Symposium. He is an Associate Editor for ACM Transactions on Information Security. He and Dr. Mike Reiter form the core of the Department’s Computer Security Group.

Professor Monrose’s research has covered a number of very interesting research questions in the area of computer network security, anonymity and privacy of sensitive network data, data encryption, and malware detection. With funding from both NSF and Department of Homeland Security (DHS), Monrose is developing techniques that allow data publishers to evaluate how well a given data anonymization approach works for their network traffic. Supported by an NSF CAREER award, Professor Monrose has studied network traffic behavior modeling, a technique used to infer what protocols, and hence what services, are being accessed between two computers. Furthermore, the behavior model can reveal much information about the encrypted traffic believed to be secure. His most recent work, sponsored by DHS, has focused on identifying malware-bearing documents freely available on the internet.