A Brief History of the Internet and its Dynamic Future
Leonard Kleinrock
University of California, Los Angeles 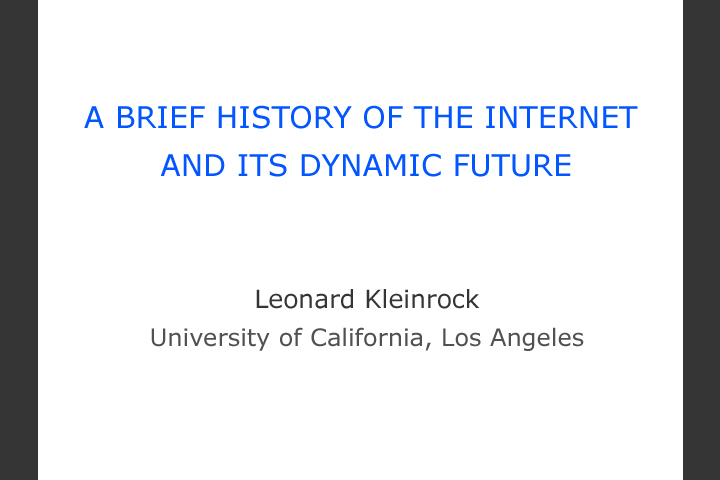 Watch the video
ABSTRACT: In this presentation we discuss the history and future of the Internet. The early work on packet switching is traced and then a brief description of the critical events in the growth of the Internet is given. We then present a vision of where the Internet is heading with a focus on the edge where user participation, flexible applications and services, and innovation are appearing. We foresee a network with extreme mobility, ubiquity, personalization, adaptivity, video addiction and surprising applications as yet unimagined.
BIOGRAPHY: Professor Leonard Kleinrock is Distinguished Professor of Computer Science at UCLA. Known as a “Father of the Internet”, he developed the mathematical theory of packet networks, the technology underpinning the Internet. His Host computer at UCLA became the first node of the Internet in September 1969. He wrote the first paper and published the first book on the subject; he also directed the transmission of the first message ever to pass over the Internet. Kleinrock’s work was recently recognized when he received the 2007 National Medal of Science, the highest honor for achievement in science bestowed by the President of the United States.

Leonard Kleinrock received his Ph.D. from MIT in 1963. He has served as a Professor of Computer Science at the University of California, Los Angeles since then, serving as Chairman of the department from 1991-1995. He received his BEE degree from CCNY in 1957, and his MS degree from MIT in 1959. He has published over 250 papers and authored six books on a wide array of subjects, including packet switching networks, packet radio networks, local area networks, broadband networks, gigabit networks, nomadic computing, performance evaluation, and peer-to-peer networks. During his tenure at UCLA, Dr. Kleinrock has supervised the research for 47 Ph.D. students and numerous M.S. students. 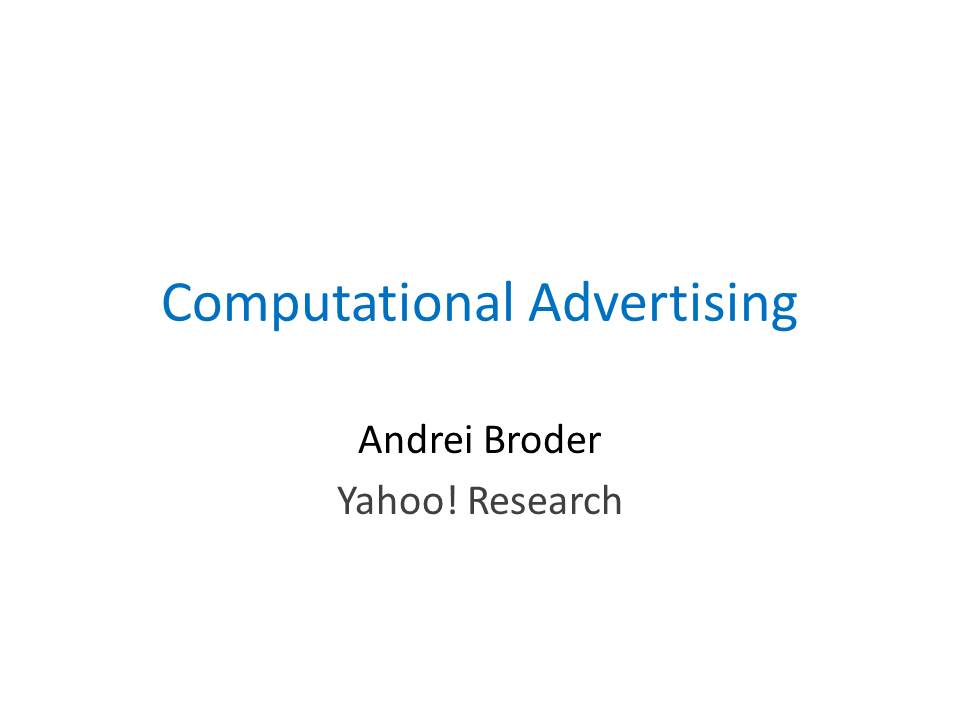 Watch the video
ABSTRACT: Computational advertising is an emerging scientific sub-discipline, at the intersection of large scale search and text analysis, information retrieval, statistical modeling, machine learning, classification, optimization, and microeconomics. The central challenge of computational advertising is to find the “best match” between a given user in a given context and a suitable advertisement. The context could be a user entering a query in a search engine (“sponsored search”) , a user reading a web page (“content match” and “display ads”), a user watching a movie on a portable device, and so on. The information about the user can vary from scarily detailed to practically nil. The number of potential advertisements might be in the billions. Thus, depending on the definition of “best match” this challenge leads to a variety of massive optimization and search problems, with complicated constraints and difficult data representation issues. This talk will give an introduction to computational advertising focusing on the interplay between science, engineering, and marketplace.
BIOGRAPHY: Andrei Broder is a Yahoo! Fellow and Vice President for Computational Advertising. Previously he was an IBM Distinguished Engineer and the CTO of the Institute for Search and Text Analysis in IBM Research. From 1999 until 2002 he was Vice President for Research and Chief Scientist at the AltaVista Company. He was graduated Summa cum Laude from Technion, the Israeli Institute of Technology, and obtained his M.Sc. and Ph.D. in Computer Science at Stanford University under Don Knuth. His current research interests are centered on computational advertising, web search, context-driven information supply, and randomized algorithms. Broder is co-winner of the Best Paper award at WWW6 (for his work on near-duplicate page detection) and at WWW9 (for his work on mapping the web). He has authored more than a hundred papers and was awarded thirty patents. He is a member of the US National Academy of Engineering, a fellow of ACM and of IEEE, and past chair of the IEEE Technical Committee on Mathematical Foundations of Computing.
Digital Discrimination
Danielle Citron
University of Maryland

Watch the video
ABSTRACT: Social network sites and blogs have increasingly become breeding grounds for anonymous online groups that attack women and minorities. The attacks include rape threats, privacy invasions, defamation, and technological attacks that silence victims. Victims go offline or assume pseudonyms to prevent future attacks, impoverishing online dialogue and depriving victims of the social and economic opportunities associated with a vibrant online presence.
Although social and legal norms have dampened offline discrimination, the internet’s Wild West culture and architecture invites bigots to move their hatred to cyberspace. The Internet facilitates anonymity, loosening social norms that constrain noxious behavior. It brings people together – a benefit when used for good purposes but especially dangerous when cyber mobs band together. Moreover, unlike offline hate that loses its impact with time, online hatred can be permanent.

These are serious problems. Nonetheless, the public pays little attention to cyber hate. Law enforcement routinely trivializes cyber harassment of women and minorities, deeming it ranting victims can, and should, ignore. Police officers often refuse to pursue cyber harassment complaints on the grounds that the conduct is legally insignificant. Victims often do not pursue legal claims for fear that they won’t be taken seriously or that no law protects them. That is an unfortunate result of false information and mistaken assumptions—the law criminalizes cyber harassment and it may provide compensation for discrimination online.

Digital Discrimination aims to chart a way forward. Leaving well enough alone is not an option. The more that we ignore cyber hate, the more prevalent in mainstream social media it will become. Although law has an important role to play, the existing legal framework can only take us so far. Other institutions can, and should, tackle cyber discrimination, including online intermediaries, educators, and interest groups.