The Power of Abstraction
Barbara Liskov
Massachusetts Institute of Technology 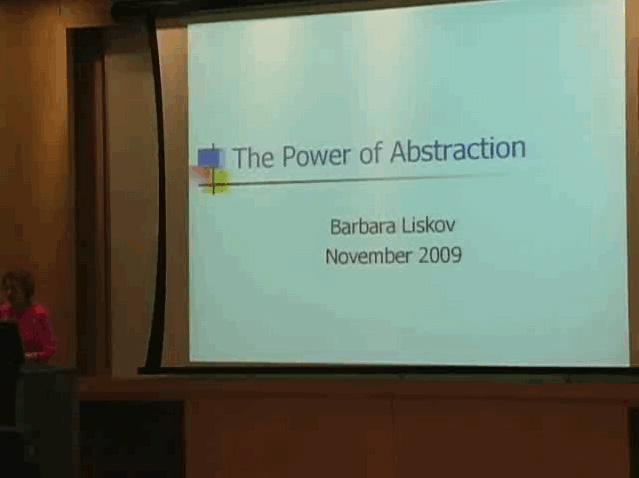 Watch the video
ABSTRACT: Abstraction is at the center of much work in Computer Science. It encompasses finding the right interface for a system as well as finding an effective design for a system implementation. Furthermore, abstraction is the basis for program construction, allowing programs to be built in a modular fashion. This talk will discuss how the abstraction mechanisms we use today came to be, how they are supported in programming languages, and some possible areas for future research.
BIOGRAPHY: Barbara Liskov is an Institute Professor at MIT and also Associate Provost for Faculty Equity. She is a member of the National Academy of Engineering, a fellow of the American Academy of Arts and Sciences, and a fellow of the ACM. She received the ACM Turing Award in 2009, the ACM SIGPLAN Programming Language Achievement Award in 2008, the IEEE Von Neumann medal in 2004, a lifetime achievement award from the Society of Women Engineers in 1996, and in 2003 was named one of the 50 most important women in science by Discover Magazine. Her research interests include distributed systems, replication algorithms to provide fault-tolerance, programming methodology, and programming languages. Her current research projects include Byzantine-fault-tolerant storage systems, peer-to-peer computing, and support for automatic deployment of software upgrades in large-scale distributed systems.
Understanding Humans with Neurobotics
Yoky Matsuoka
University of Washington 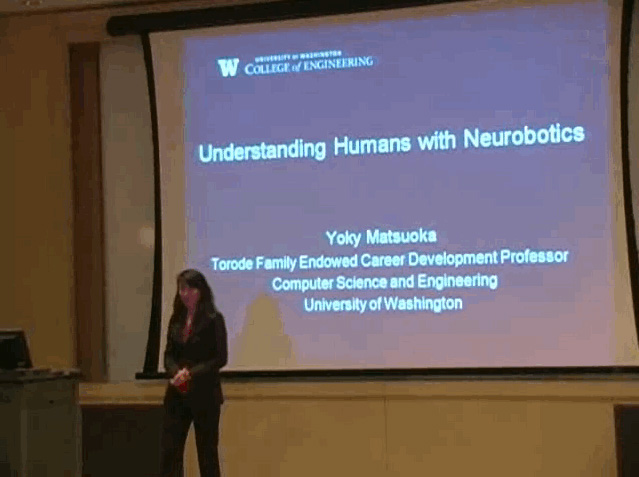 Watch the video
ABSTRACT: Neurobotics is a field that lies at the intersection of Robotics and Neuroscience. In Neurobotics, robotic models and environments are used to understand the neuromuscular control and biomechanics of human limbs. In parallel, robotic systems are developed to augment, replace and rehabilitate damaged sensorimotor functions. In this talk, an overview of this work is presented, with a detailed example of how to understand and restore human level dexterity.
BIOGRAPHY: Yoky Matsuoka is the Torode Family Endowed Career Development Professor in Computer Science and Engineering at the University of Washington. She received her Ph.D. at MIT in Electrical Engineering and Computer Science in the fields of Artificial Intelligence and Computational Neuroscience in 1998. She received an M.S. from MIT in 1995 and a B.S. from UC Berkeley in 1993, both in EECS. She was also a Postdoctoral Fellow in the Brain and Cognitive Sciences Department at MIT and in Mechanical Engineering at Harvard University. Her work has been recognized with a MacArthur Fellowship, and she has been acclaimed as one of “The Brilliant Ten” in Popular Science Magazine and “Power 25” in Seattle Magazine. In addition, she was awarded a Presidential Early Career Award for Scientists and Engineers (PECASE), an Anna Loomis McCandless Chair from Carnegie Mellon University, and the IEEE Robotics and Automation Society Early Academic Career Award.
Network Evolution, Network Economics, and Network Innovation
Andrew Odlyzko
University of Minnesota 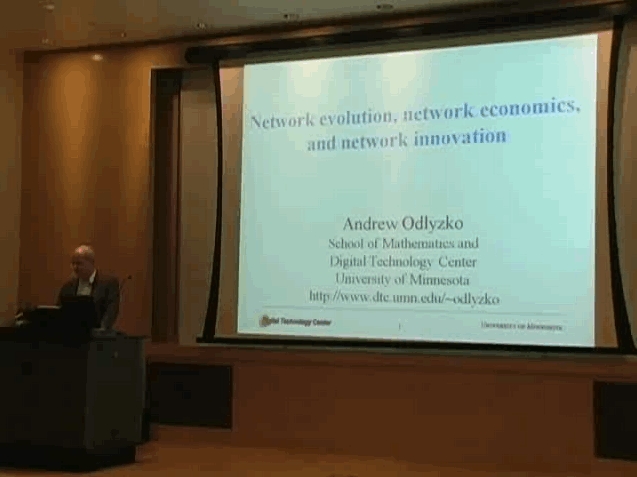 Watch the video
ABSTRACT: Technology is opening up exciting new opportunities in networking, especially through the convergence of wireline and wireless communications. But technology is just one element, and, as in the past, and perhaps more than in the past, economics and regulation will have major influences on what is deployed, and how it is used. A survey of the past and present, and speculations about the future, will present some of the key constraints on technological dreams, including the many false dogmas that are hobbling progress.
BIOGRAPHY: Andrew Odlyzko is a Professor in the School of Mathematics at the University of Minnesota. He had a long career in research and research management at Bell Labs and AT&T Labs, and then built an interdisciplinary research center and handled other positions in research administration jobs in Minnesota. He has written over 150 technical papers in computational complexity, cryptography, number theory, combinatorics, coding theory, analysis, probability theory, and related fields. In recent years he has also been working in electronic commerce, economics of data networks, and economic history, especially on diffusion of technological innovation. Among his current projects is the MINTS effort, which monitors trends in Internet traffic. More information, including papers and presentation decks, is available on his web site, http://www.dtc.umn.edu/~odlyzko/.

Building a Start-up? Learn How to Fundraise From Top Venture Capitalists