Surgery over the Internet
Blake Hannaford
University of Washington

Watch the video
ABSTRACT: Surgery is a demanding unstructured physical manipulation task involving highly trained humans, advanced tools, networked information systems, and uncertainty. In combat casualty care these challenges are further magnified. This talk will review engineering and scientific research at the University of Washington Biorobotics Lab, starting in the operating room and developing towards fieldable systems, aimed at better care of patients, including remote patients in extreme environments. Network delay and jitter properties have a significant effect on performance of telemanipulation systems. We have measured and simulated global internet links and studied resulting performance. Technologies developed include surgical robotics, teleoperation over the internet, and field-deployable wireless links. Info is available at http://brl.ee.washington.edu
BIOGRAPHY: Blake Hannaford, Ph.D., is Professor of Electrical Engineering, Adjunct Professor of Bioengineering, Mechanical Engineering, and Surgery at the University of Washington. He received the B.S. degree in Engineering and Applied Science from Yale University in 1977, and the M.S. and Ph.D. degrees in Electrical Engineering from the University of California, Berkeley, in 1982 and 1985 respectively. Before graduate study, he held engineering positions in digital hardware and software design, office automation, and medical image processing. At Berkeley he pursued thesis research in multiple target tracking in medical images and the control of time-optimal voluntary human movement. From 1986 to 1989 he worked on the remote control of robot manipulators in the Man-Machine Systems Group in the Automated Systems Section of the NASA Jet Propulsion Laboratory, Caltech. He supervised that group from 1988 to 1989. Since September 1989, he has been at the University of Washington in Seattle, where he has been Professor of Electrical Engineering since 1997, and served as Associate Chair for Education from 1999 to 2001. He was awarded the National Science Foundation’s Presidential Young Investigator Award and the Early Career Achievement Award from the IEEE Engineering in Medicine and Biology Society and is an IEEE Fellow. His currently active interests include haptic displays on the internet, and surgical robotics. He has consulted on robotic surgical devices with the Food and Drug Administration Panel on surgical devices.
Technology with Emotional Intelligence
Rosalind Picard
Massachusetts Institute of Technology 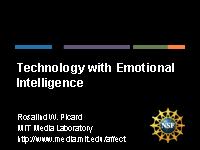 Watch the video
ABSTRACT: Skills of emotional intelligence include the ability to recognize and respond appropriately to another person’s emotion, and the ability to know when (not) to display emotion. This talk will demonstrate advances at MIT aimed at giving several of these skills to technology including mobile devices, robots, agents, wearable & traditional computers. I will conduct a live demonstration of technology (developed w/el Kaliouby) to recognize complex cognitive-affective states in real time from a person’s head and facial movements. This technology can classify when a person looks like he or she is concentrating, interested, agreeing, disagreeing, confused, or thinking. These states signal important information, such as when is a good time to interrupt, or when it might be appropriate to apologize for interrupting. A wearable version of this system is being developed for helping people with autism who often face challenges reading social-emotional cues. I will describe several other applications of the technology to health, audience feedback (how did they feel about that show?), education, driving, and more. I will also briefly discuss some of the social, ethical, and philosophical issues surrounding development of affective technology.
BIOGRAPHY: Rosalind Picard is founder and director of the Affective Computing Research Group at the MIT Media Laboratory. After receiving a Bachelors in Electrical Engineering from Georgia Tech, she joined AT&T Bell Labs, contributed to the design of the DSP16 chip and developed new algorithms and architectures for image compression. After earning masters and doctorate degrees in Electrical Engineering and Computer Science from MIT, she joined the MIT faculty and pioneered research on content-based retrieval of image and video, co-developing the widely cited Photobook system and several new mathematical and semantic models for image and video data. Her work using a society of models for machine learning won a best paper prize (with Tom Minka). In 1997 she authored the book Affective Computing, laying the foundation for a new area of research giving computers skills of emotional intelligence. She led the first development of technology to interpret and respond empathetically to affect in posture and in multiple modalities including face, gesture, physiology and task behavior. Applications of this technology include autism, health, fitness, education, usability, marketing, and customer service. Picard has been honored as a fellow of the IEEE.
Active in professional service, Picard is presently serving on the Editorial Board of User Modeling and User-Adapted Interaction: The Journal of Personalization Research, as well as on the Advisory Committee for the National Science Foundation’s division of Computers in Science and Engineering (CISE) and the Advisory Board for the Georgia Tech College of Computing. She co-chaired the 2007 Affective Computing and Intelligent Interaction conference in Portugal, and actively co-directs the Media Lab’s Things That Think consortium of thirty-five companies.

Watch the video
ABSTRACT: A scientific discipline can be characterized by its outstanding open problems. This talk will examine some of the deepest and most intriguing open problems that have shaped and are continuing to shape the science of computer science. It is based in part on the roundtable discussion the Department of Computer Science faculty had with Bill Gates when he visited Columbia University in October 2005.