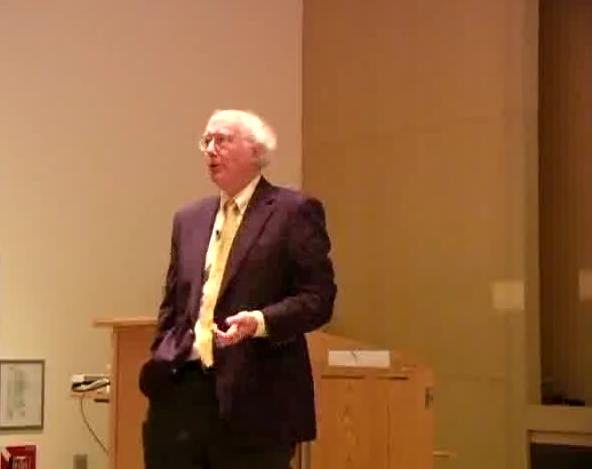 Watch the video
ABSTRACT: The future of the Internet is not defined by new technology. The Internet of today is firmly embedded in a larger space of social, political and economic considerations, and it is the understanding and manipulation of these considerations that will allow progress toward a better network for tomorrow. Our current security problems, for example, are not just a technical failure, but a consequence of decisions we made about the balance of identity and anonymity for Internet users. We could shift this balance, but it is important to catalog what we might lose as well as what we might gain. For a technologist, the questions are no longer “can we build it,” but “which version should we build”?

When we design new network mechanism, it is important to remember that there are many stakeholders in the Internet space with interests that may not be aligned. The tussle among the stakeholders will shape how our new mechanisms are used, but we as technologists are usually not well trained to design technology to shape (or survive) the tussle. We tend to think about goals such as performance optimization, rather than balance of power among stakeholders.

This talk will offer some specific requirements that an Internet ten years from now should meet, and will then offer some design principles for tomorrow: how to design a mechanism that tries to shape the larger context in which the Internet must function.

BIOGRAPHY: David Clark is a Senior Research Scientist at the MIT Computer Science and Artificial Intelligence Laboratory, where he has worked since receiving his Ph.D. there in 1973. Since the mid 70s, Dr. Clark has been leading the development of the Internet; from 1981-1989 he acted as Chief Protocol Architect in this development, and chaired the Internet Activities Board. More recent activities include extensions to the Internet to support real-time traffic, pricing and related economic issues, and policy issues surrounding the Internet, such as broadband local loop deployment. His current research looks at re-definition of the architectural underpinnings of the Internet, and the relation of technology and architecture to economic, societal and policy considerations. Dr. Clark is past chairman of the Computer Science and Telecommunications Board of the National Academies, and has contributed to a number of studies on the societal and policy impact of computer communications. He is co-director of the MIT Communications Futures Program, a project for industry collaboration and coordination along the communications value chain. Dr. Clark is participating in the Global Environment for Networking Innovations (GENI) project, a new National Science Foundation project to pilot new protocols and applications for a future Internet.
Virtual Cinematography: Postproduction Control of Viewpoint and Illumination
Paul Debevecagle
University of Southern California 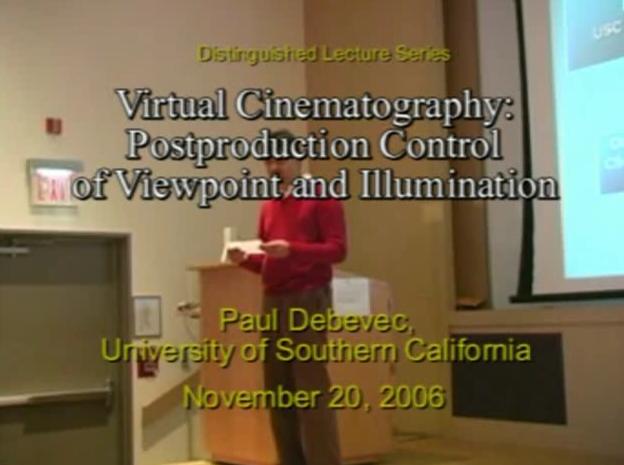 Watch the video
ABSTRACT: In many of today’s films, much of the imagery is a combination of live-action photography and computer-generated imagery. Actors filmed in the studio are placed into distant or imagined locations, and CGI creatures and characters are added in alongside the main cast. The central challenge in combining the real and the rendered is making it look like everything was shot at the same time with the same camera. This is particularly difficult for live-action elements, since their viewpoint and lighting becomes fixed as soon as they are filmed. This talk will present emerging technologies for filming actors’ performances in ways that their viewpoint and their illumination can be crafted virtually as part of the postproduction process. Examples include shooting high speed video under rapidly changing lighting conditions, filming with arrays of cameras, and using high-speed video projectors to reconstruct the actor’s shape at every instance of time. These techniques not only make it easier to integrate live-action and computer-generated imagery, but give filmmakers new levels of control over lighting and composition for virtual cinematography.
BIOGRAPHY: Paul Debevec is a research associate professor at the University of Southern California and the executive producer of graphics research at the USC Centers for Creative Technologies. Debevec’s Ph.D. thesis (UC Berkeley, 1996) presented Facade, an image-based modeling and rendering system for creating photoreal architectural models from photographs. Using Facade he led the creation of virtual cinematography of the Berkeley campus for his 1997 film “The Campanile Movie” whose techniques were used to create virtual backgrounds in the 1999 film “The Matrix”. Subsequently, Debevec developed techniques for illuminating computer-generated scenes with real-world lighting captured through high dynamic range photography, demonstrating new image-based lighting techniques in his films “Rendering with Natural Light” (1998), “Fiat Lux” (1999), and “The Parthenon” (2004); he also led the design of HDR Shop, the first widely-used high dynamic range image editing program. At USC CCT, Debevec has led the development of a series of Light Stage devices for capturing and simulating how objects and people reflect light, recently used to create realistic digital actors in films such as “Spider Man 2” and “Superman Returns”. He is the recipient of ACM SIGGRAPH’s first Significant New Researcher Award and a co-author of the 2005 book “High Dynamic Range Imaging” from Morgan Kaufmann. http://www.debevec.org/ .