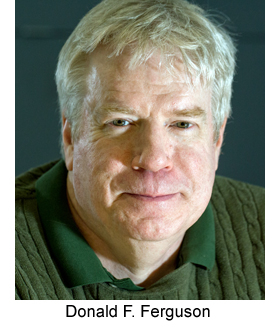 Donald F. Ferguson, after 30 years of technical and executive leadership in the computer industry, is joining Columbia’s Computer Science Department as Professor of Practice. He will be the first in the department to have the title.

For students, his appointment means a chance to learn from an industry insider the nuts and bolts of how computer science is practiced in the real world and how it differs from computer science as it is taught in a classroom.

“We learn things in industry the hard way,” says Ferguson. “I may not be able to teach it the right way, but I’ve done it all the different ways; by process of elimination, this has to be the right way because every other way I’ve done it has been wrong.”

Ferguson’s career started at IBM. For ten years he worked in IBM Research before a project of his got moved into production (becoming WebSphere), with him following to oversee architecture and technical innovation. From then on, he did less hands-on engineering and more “advise and consent,” that is, giving advice on design and then the OK to move a project forward. After being made chief architect for the Software Group at IBM, Ferguson was in charge of hundreds of products and thousands of engineers. Later at Microsoft, he managed projects exploring the future of enterprise software before moving to CA (formerly Computer Associates) where as CTO he led new product and technology development. In 2012, he moved to Dell, where as vice president and CTO for the company’s Software Group, he oversaw architecture, implementation design, technical strategy, and innovation.

Through his many positions at leading computer companies, Ferguson was directly involved in architecting numerous complex, end-to-end systems and services: hybrid cloud management, BYOD/mobility management, Internet-of-Things, and next-generation connected security. For his technical expertise and leadership, Ferguson holds the distinction of being the only person to be appointed an IBM Fellow, a Microsoft Technical Fellow, and a Dell Senior Fellow.

In his most recent role, he is an entrepreneur, having cofounded Seeka.TV, a streaming and social platform for connecting producers and consumers of video. Though nominally CTO, with only four in the company, there is no more advise and consent; he’s back to writing software.

He enjoys teaching also and for the past 10-15 years on and off, he has been an adjunct professor at Columbia, teaching advanced courses in serverless computing, cloud applications, modern as-a-service applications, and other topics directly related to his work experience. While teaching is for him an opportunity to learn, it has also given him insight into the huge gulf in how industry operates vs how software and programming are taught to students. Scale of programming is one issue—a piece of code written in a semester compared to 20M lines of code in a deployed application—but there are many others.

“The vast majority of the programming students learn is function call-return; wait a certain amount of time for a call back. But in industry, there are asynchronous applications and event-driven and queuing-based applications. Systems are big and complex, geographically distributed, and under different organizational control so it’s necessary to build and structure software that can accommodate all these different levels of complexity.”

“Don can draw from his invaluable and varied industry experience to offer great courses for our students,” says Julia Hirschberg, chair of the Computer Science Department. “We are delighted to have him returning to the department as Professor of Practice so he can teach many more students and offer more classes.”

Ferguson’s association with Columbia is of long standing. Columbia granted him a PhD in Computer Science (1989) for his thesis in applying economic models to manage system resources in distributed systems; he has taught at Columbia as an adjunct professor; and in 2013 the Columbia Engineering Alumni Association awarded him the Egleston Medal citing his contributions as a thought-leader in cloud computing, the father of WebSphere, and leader of software design.

Over his 30-year career, Ferguson has seen and been a part of tremendous technological change: from huge mainframes attended by a select coterie of engineers to computers hidden in light switches; from programming being something mysterious and little-understood to something done by high school students and others who may have little interest in a computer science degree; from all the computing power needed to send a man to the moon eclipsed by the power of an iPhone anyone can buy.

He laughs off an invitation to predict where technology will be in 10 years.

“One of the things that’s nice about being a college professor is teaching the people who will be deciding where things go in 10 years. I always tell students to stay in touch. I want to know what great things these students are going to be doing.”