Joseph F. Traub, a pioneering computer scientist and founder of the Computer Science department at Columbia University, died Monday, August 24, 2015 in Santa Fe, NM. He was 83. Most recently the Edwin Howard Armstrong Professor of Computer Science, Traub was an early pioneer in computer science years before such a discipline existed, and he would do a lot to shape the field.
Traub was most known for his work on optimal algorithms and computational complexity applied to continuous scientific problems. In collaboration with Henryk Woźniakowski, he created the field of information-based complexity, where the goal is to understand the cost of solving problems when information is partial, contaminated, or priced. Applications for information-based complexity are diverse and include differential and integral equations, continuous optimization, path integrals, high-dimensional integration and approximation, and low-discrepancy sequences. 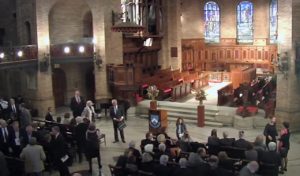