A deck of playing cards honors 54 notable women in computing. Produced by Duke University and Everwise (in conjunction with CRA-W and Anita Borg Institute Wikipedia Project), the first card decks were distributed at this year’s Grace Hopper conference. (A Kickstarter campaign is raising money for a second printing.)

One of the women to be honored with her own card is Kathy McKeown, a computer scientist working in the field of natural language processing. The first female full-time professor in Columbia’s school of engineering, she was also the first woman to serve as department chair. Currently the Henry and Gertrude Rothschild Professor of Computer Science, she is also the inaugural director of Columbia’s multidisciplinary Data Science Institute. And now she is the seven of clubs. 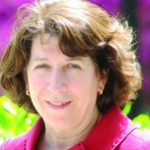